Leaked Database of over 1 billion Chinese Civilians for Sale 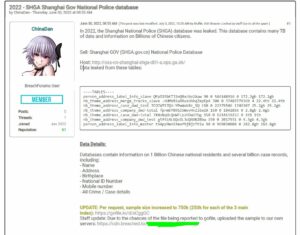 Included in the for sale ad were samples of the data to verify authenticity.  The alleged leak was apparently from a contract software developer that had errantly posted the database login credentials to a project blog some months earlier.

The leak has been verified by several people and posted online, but Western media has not really picked up on the impact of such an event.  If legitimate, it represents the largest data leak ever reported. 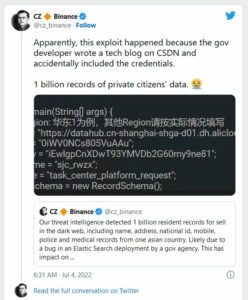 Oddly enough, there doesn’t seem to be anything called the “Shanghai National Police”, only the “Shanghai Municipal Police” returns any search results as a legitimate entity in major search engines.  Still, regardless if this is a translation error or some other mis-identification, the validity of the data appears to be proven.  We attempted to connect to the sample link provided through a VM and VPN and were able to download the 110mb compressed gzip sample file and view the sample files.  When uncompressed, the files were several hundred megabytes each in JSON format in English language and Chinese characters (multi-byte format), consisting of personal information, police record case data files, and an address merge with cell phone data.   Here’s an example of the personal detail record file:

The police case record data appears to be of the most concern,  with the actual data content consisting of detailed police reports of the charged offense, including the date/time and specific location of the criminal events.  Deciphering the information is difficult for most westerners since most of the text is in traditional Chinese, but it would be trivial to use automated translating to get the gist of the content when inserting into a database.

With the horse already having left the barn, there doesn’t appear much that the Chinese government can do to mitigate this leak.  Addresses and phone numbers can of course be changed by the individuals, but having these records open to the public (particularly the police reports) is a massive blow to individual privacy (such that it is in PRC), and will likely cause problems for millions of people for years.